IMPORTANT! Due to the response to Coronavirus (COVID-19) events on this site may be postponed or canceled. Please CLICK HERE for the latest information about cancellations. 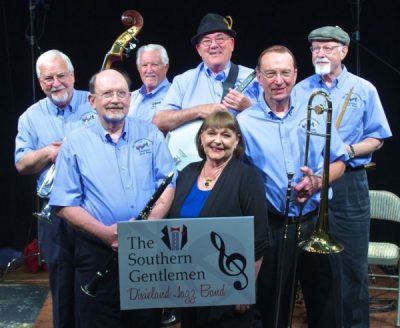 David Hunt is a retired educator who has lived in the Middle Georgia area most of his life.  As a boy, David took up the clarinet, but played it very little in adulthood.  When in his twenties, David began playing bass guitar in a local band with his brother, Richard (“The Hunt Brothers Band”), and, over the years, has played with various other local bands.  After retirement, David was asked to put together a few musicians to play a Mardi Gras event.  The rather impromptu performance kindled

David Hunt is a retired educator who has lived in the Middle Georgia area most of his life.  As a boy, David took up the clarinet, but played it very little in adulthood.  When in his twenties, David began playing bass guitar in a local band with his brother, Richard (“The Hunt Brothers Band”), and, over the years, has played with various other local bands.  After retirement, David was asked to put together a few musicians to play a Mardi Gras event.  The rather impromptu performance kindled his desire to play a genre of music he and his brother had loved since childhood – Dixieland Jazz.  In 2011, David and Evan Jones asked several friends (and Richard) to get together and “jam” some Dixieland.  The same guys are still enjoying playing the New Orleans sound!  With the addition of Evan’s wife, Patti, the sound just keeps getting better!

Richard Hunt is a retired banker. He played trombone in high school and college bands, and began playing guitar in college. He has played in numerous bands throughout the years as a guitarist, vocalist and occasional trombonist. He and his brother, David, clarinetist for The Southern Gentlemen, enjoyed many years of success with their five piece dance group, The Hunt Brothers Band, with Richard on guitar and vocals and David on bass and vocals. In recent years Richard has reacquainted himself with the trombone and is currently playing it in six different musical ensembles. He plays trombone with The Northwinds Symphonic Band, The Sentimental Journey Jazz and Swing Band, The Believers Concert Band, The Chicken City Stompers Dixieland Jazz Band and his church orchestra. He has been a fan of traditional New Orleans Dixieland Jazz as long as he can remember, and is having a blast playing it with The Southern Gentlemen Dixieland Jazz Band.

Evan Jones began his musical career playing first chair trumpet in the Lanier High School Band in Macon, Ga. He did studio work with Wayne Cochran and recorded with King Records, Macon, Ga.  In 1964 Evan was drafted into the U.S. Army where he played first chair trumpet with the 3rd. Armored Division Band in Frankfurt, Germany. After his tour of duty, Evan traveled with Buddy Knox who had several number one hits including “Party Doll”.  He married his wife, Patti, in 1968 and they toured the country as “The Family Affair” for many years. He and Patti continue to entertain and Evan plays trumpet with the Tabernacle Baptist Church Orchestra. He also teaches trumpet at Young America Music School.

Emmet Young has lived in Macon since 1972 and is owner of Young America Music Schools (since 1990), a full line music dealership with over 400 students.  Here he teaches banjo and several other instruments. The store has over a dozen other teachers.  He studied with Roger McDuffy and G Braunagel at Florida State University, studied theory and composition at Emory University where he performed with the Emory Glee Club and Chapel White's Emory University Chamber Orchestra. He has played in combo orchestras since 9th grade when he began playing professionally with Don Bennet and the Lamplighters in 1959…  Since then he has played in dance bands all over the state of Georgia, the Florida panhandle, southern Alabama, S. Carolina and Tennessee.  He recently retired from the Georgia Big Band, an 18 piece swing band, as the last original member (formed in 1984 as the Dublin Jazz Band).  He currently plays in the Tabernacle Baptist Church Orchestra and regularly has his students play and perform for various local civic events.

Steve Chanin has been playing the drums since 1956 with bands in Middle Georgia and Atlanta.Bands he has played with include The Afro-Jazztet, The Chevelles, Duke DeMay's Trio, Bob Huellemeier's Orchestra, Quintessence, The Red Heifers, The Jazz Association of Macon's Ensemble, The Freedom Jazz Trio, The Monty Cole Quartet and The Southern Gentlemen Dixieland Band In addition he has played with The Macon Symphony Orchestra and for musicals at The Macon Little Theater, Theater Macon and Macon State College.

Chet Burchfield has been playing the upright bass since attending Lanier Junior High School. After graduating from Willingham in 1961 he joined the US Air Force Reserve Band at Warner Robins, GA. He was transferred to the US Air Force Band of the Pacific in 1963 at Hickam AFB, Hawaii. He remained in Honolulu and played with Jazz artists, Trummy Young, Hadda Brooks, Joe Castro, John Poole and Anita O'Day. After returning to Macon in 1966 he played with the Duke DeMay trio and then toured the east coast with the Flo Dryer International Quartet. More recently

Patti Davis Jones was born into a musical family in Macon, Ga., Patti began singing in grammar school when teachers would ask her to come to their rooms and sing for their classes. During her teenage years she sang with various local groups and performed in local teen venues. She married her husband Evan (also in the Dixieland Jazz Band) in 1968 and they formed "The Family Affair Band" traveling the U.S. extensively playing Top 40 and performing floor shows. Patti continues to sing with her husband at private functions, church and The Southern Gentlemen Dixieland Jazz Band.

Macon365.com is brought to you by: