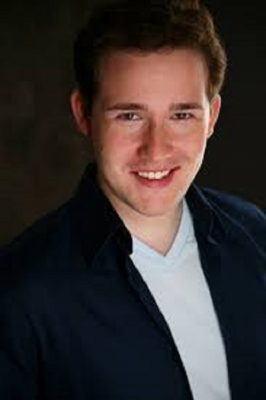 Mr. Haynie should be a familiar name to MLT patrons over the last few years.  Haynie has been the lobby artists for a number of shows and performance events.  But he also has a long-standing connection to MLT that makes him unique in the history of the theatre.  JP’s mother is Sylvia Haynie, frequent guest director since 2004 and current artistic manager of the theatre. But his father was also the artistic director here in the late 1970’s and again in the 1980’s.  Mr. Haynie, the younger, has been involved with the theatre literally his entire life.

A graduate of Stratford Academy and Mercer University (Theatre) here in Macon, Mr. Haynie also holds an MFA in Musical Theatre from the University of Central Florida.  He worked as the resident lighting designer here at Macon Little Theatre before moving to New York with his wife, Ashlee.  Over the next nine years, his film and TV credits include Men in Black 3,  three seasons on The Good Wife, and appearances on Boardwalk Empire among many others.

Lobby gallery exhibits by Mr. Haynie include the Frozen display back in June of this year, which featured a 72-panel display creating one large scale work.  His photos have been on display in 2018 for Ragtime, the MLT Patriotic Shows and the 2019 production of Hunchback of Notre Dame.

Mr. Haynie is currently back in Georgia to pursue film work and MLT is very fortunate to have this opportunity to engage him for the next production:  Sherlock Holmes and The Final Adventure.  To find out more about him and his unique perspective on directing for MLT,  contact him at jp.haynie@yahoo.com