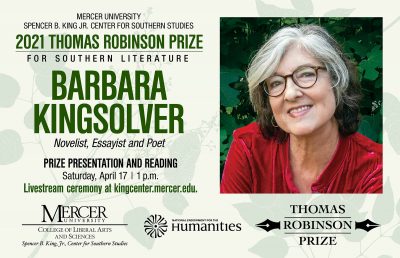 Presented by Spencer B. King Jr. Center for Southern Studies at Online/Virtual Space

Mercer University’s Spencer B. King Jr. Center for Southern Studies will award the 2021 Thomas Robinson Prize for Southern Literature to Barbara Kingsolver on April 17 at 1:00 p.m. in a livestreamed ceremony at kingcenter.mercer.edu.

The prize will be presented April 17 at 1 p.m. in a livestreamed ceremony at kingcenter.mercer.edu.

“I’m honored to join some of my great writing heroes as a recipient of this prize and to carry on the tradition of Southern literature, the language of my heart,” said Kingsolver.

Kingsolver was born in 1955 and grew up in rural Kentucky. She earned degrees in biology from DePauw University and the University of Arizona. She has lived in England, France and the Canary Islands and has worked in Europe, Africa, Asia, Mexico and South America. She spent two decades in Tucson, Arizona, before moving to southwestern Virginia where she currently resides.

“Barbara Kingsolver’s works illustrate the complexity and fragility of connections between humans and the environment,” said Dr. David A. Davis, chair of the Robinson Prize Committee and associate professor of English at Mercer. “She finds points of intersection that cross time and space and explores the relationships that extend outward from these points, revealing that isolation is an illusion, even in remote, rural parts of the world.”

Kingsolver is the author of 15 books translated into more than two dozen languages and adopted into the core literature curriculum in high schools and colleges throughout the nation. She served as editor for Best American Short Stories 2001, contributed to more than 50 literary anthologies, and her reviews and articles have appeared in most major U.S. newspapers and magazines.

The Poisonwood Bible was a finalist for the Pulitzer Prize and the Orange Prize and won the national book award of South Africa before being named an Oprah Book Club selection. Animal, Vegetable, Miracle won numerous prizes including the James Beard award. The Lacuna won Britain’s prestigious Orange Prize for Fiction in 2010.

Kingsolver was named one the most important writers of the 20th century by Writers Digest. In 2000, she received the National Humanities Medal, the nation’s highest honor for service through the arts. She has received multiple awards from the American Booksellers Association and the American Library Association, among many others. In 2011, she was awarded the Dayton Literary Peace Prize.

Kingsolver established the Bellwether Prize for Fiction, the nation’s largest prize for an unpublished first novel, which since 1998 has helped to establish the careers of more than a half-dozen new literary voices. Through a recent agreement, the prize is now known as the PEN/Bellwether Prize for Socially Engaged Fiction.