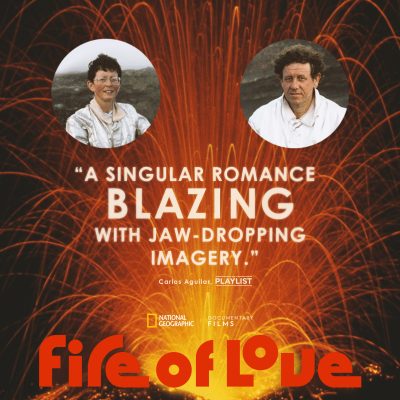 Intrepid scientists and lovers Katia and Maurice Krafft died in a volcanic explosion doing the very thing that brought them together: unraveling the mysteries of volcanoes by capturing the most explosive imagery ever recorded.

“Fire of Love” tells the story of two French lovers, Katia and Maurice Krafft, who died in a volcanic explosion doing the very thing that brought them together: unraveling the mysteries of our planet, while simultaneously capturing the most explosive volcano imagery ever recorded. Previously unseen hours of pristine 16-millimeter film and thousands of photographs reveal the birth of modern volcanology through an unlikely lens — the love of its two pioneers.

“The fire of Katia and Maurice Krafft’s obsession consumed them, in no small part, because it ultimately restored their kinship with humanity.” – Los Angeles Times

“Fire of Love is one of a vanishingly rare breed of documentary that is determined to be “total cinema,” not just capturing the facts of what happened to its subjects but creating an entire aesthetic—a vibe—around them.” – RogerEbert.com