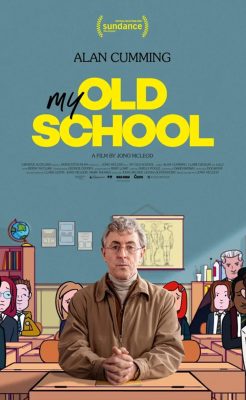 In 1993, 16-year-old Brandon Lee enrolled at Bearsden Academy, a secondary school in a well-to-do suburb of Glasgow, Scotland. What followed over the next two years became the stuff of legend.

In 1993, 16-year-old Brandon Lee enrolled at Bearsden Academy, a secondary school in a suburb of Glasgow, Scotland. The bright student surprised teachers by blazing toward his goal of entering medical school, displaying knowledge beyond his years. Brandon found friends despite his initial awkwardness, took bullied students under his wing, and even starred in the school’s production of South Pacific. But then his unbelievable secret was revealed.

“Here is a documentary for anyone who’s ever fantasized about going back in time to their school days, to reverse all those heartbreaks and humiliations. In other words: all of us.” – The Guardian

“Cumming’s performance, or presentation, is at once casual and assured, which makes it all the more compelling.” – The Boston Globe

Discussion after the 2pm screeningClosed-captioning not available for this filmHearing assist headphones available on request.